The Potential for Happier Endings through Health IT

National Health IT Week (NHIT Week), October 8-12, is a nationwide awareness week focused on catalyzing actionable change within the U.S. health system through the application of information and technology. Virtually, in Washington DC and beyond, NHIT Week stakeholders collaborate towards actionable outcomes which demonstrate the power information and technology has to transform health in the U.S., and its wide-reaching global impact. 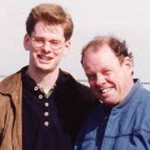 This photo, of my much younger self (on the left) with my father, was taken in 1993. He died suddenly just two years later at the age of 57.

In 1980, Dad was diagnosed with hyperthyroidism. With this condition, the parathyroid glands, which normally regulate the body’s natural production of calcium, actually overproduce, a problem called hypercalcemia. Over time, hypercalcemia can lead to kidney disease, kidney stones, osteoporosis, dementia and many other problems. The primary treatment for persistent hyperthyroidism is to surgically remove the malfunctioning glands. My father underwent this procedure later that same year.

Fast forward 15 years to 1995 – the memory of that surgery had all but disappeared from our collective consciousness. One afternoon in early March, Dad slipped on an unseen patch of ice, fell and broke his arm. After a visit to the emergency room, we all assumed he would have to put up with a few days of discomfort and inconvenience but then return to his regular routine. What none of us realized was the internal chain reaction that had begun.

After a couple of days recovering at home, Dad was feeling worse. Back in the emergency department, the hospital staff began running tests to identify what was making him sick, without success. Without knowledge of his prior surgery, they had no way of knowing that the calcium coursing through his bloodstream to assist in healing his broken arm was also affecting the function of his vital organs. In desperation, the attending ER physician came back to my family and asked if Dad had any history of illness that was not in his chart. My sister remembered his surgery from all those years before. Almost immediately the doctor realized the problem and rushed back to attempt to save his life. Despite the best efforts of his medical team, Dad died later that afternoon.

If the doctors would have had access to a community-based longitudinal health record in 1995, would instant electronic access to his entire health history have changed the outcome for my Dad? We'll never know. But today we can say with certainty that health information technology is giving healthcare professionals critical information they need at the point of care to save lives. That’s what I call a happier ending and the reason #IHeartHIT!

Share your story, provide insights and help develop healthcare policy during NHIT Week – focused on catalyzing actionable change within the U.S. health system through the effective use of health IT.

View this year’s calendar of events
Explore this guide on supporting #NHITWeek through social media
Submit an #IHeartHIT Story
Participate in the Virtual March
Explore 10 ways to celebrate in your hometown
See the 2018 NHIT Week partners list, and sign up today