The opioid epidemic doesn’t discriminate, said Afton Wagner, former senior manager, federal affairs & pharmacy initiatives at HIMSS. “What’s very alarming to everyone is that there’s really no indication that this epidemic is slowing down any time soon, as the death tolls for opioid overdoses continue to be on the rise.” In 2016, overdoses involving opioids in the U.S. took more than 42,000 lives.

A 2017 letter from the Commission on Combating Drug Addiction and the Opioid Crisis urged the president to take action, stating that the death toll from opioid overdoses was “equal to September 11 every three weeks.” In October 2017, the president declared the opioid epidemic a national public health emergency.

Though there’s no single cause for the public health crisis, it’s important to acknowledge key events that took place during the early to mid-1990s which helped spur the epidemic. The idea of pain as the “fifth vital sign” rapidly caught fire, timed poorly with the launch of an aggressive marketing campaign for a new prescription pain medication. The new drug’s marketing campaign led doctors and patients to believe that this pain management medication was non-addictive. Though this was later determined to be misinformation, it wasn’t soon enough to curb the subsequent overprescribing, widespread diversion and misuse of these medications that built momentum for the full-fledged epidemic we’re seeing today.

The CDC reports that in 2015, enough opioids were prescribed to keep every American medicated around the clock for three weeks straight. 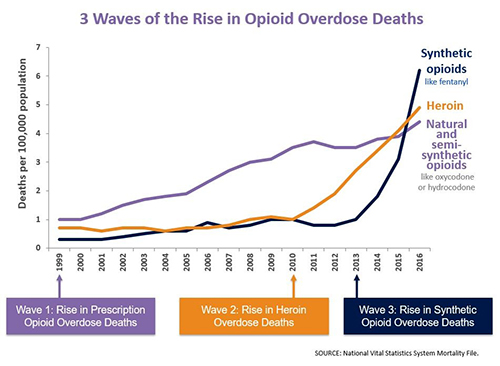 As we look at the graph above, we can see three distinct waves related to the increase in opioid overdose deaths. In Wave 1, we see prescription overdose deaths rising slowly and steadily from 1999 to 2016. Wave 2 displays a major increase of heroin overdose deaths in 2010, when America saw a pill problem turn into a heroin problem. “Patients addicted to prescription opioids turned to heroin when the supply of the prescription medications needed to feed their addiction was not readily available,” Wagner explained.

Wave 3 is where the U.S. currently stands with the quickly progressing epidemic. Beginning around 2013, a major increase was observed in drug overdoses involving synthetic opioids, particularly those involving illicitly manufactured fentanyl, which is more potent than heroin. The dangers of these illicit substances prompted the Drug Enforcement Administration to release recommendations for first-responders to proceed with increased caution, as minimal contact with these substances (such as skin exposure) can result in death.

In addition to the Administration’s focus, the opioid epidemic is also top of mind to federal government agencies. Specifically, the Department of Health and Human Services (HHS) is committed to using expertise and resources from its agencies to combat the opioid epidemic and announced a five-point strategy in April 2017 for fighting the opioid crisis. HHS will be coordinating opioid epidemic efforts across agencies moving forward.

The opioid epidemic didn’t start with just one cause, which means only a multi-faceted approach will work in combating it. Resources helping empower providers with information during the public health epidemic include Prescription Drug Monitoring Programs (PDMPs) which track prescription medication distribution.

Created in 2011, Nebraska’s PDMP is among the most innovative and patient-safety focused to date. In 2016, Nebraska state legislation expanded the potential of its PDMP by allowing prescribers/dispensers to access the system at no cost. In January 2018, the state mandated that all controlled substance prescriptions be reported to PDMPs.

In many states PDMPs are specifically focused on tracking opioids, controlled substances, and other drugs of concern with growing abuse and overdose rates. As of January 2018, Nebraska’s PDMP is the first in the U.S. to track all prescription data rather than just controlled substances. This can not only help curb opioid overdose rates and identify things like overprescribing and doctor shopping but can also prevent deaths through detection of potential drug allergies or negative interactions.

Nebraska is also the first state to operate their PDMP on a health information exchange platform and currently has one of the lowest opioid-related overdose rates in the country. The state utilizes the PDMP first and foremost as a patient safety tool, which improves outcomes for all patients.

The Long Road Ahead

As covered in the 2017 Governors Letter to President’s Commission on Combating Drug Addiction & the Opioid Crisis, the first points of focus in fighting the epidemic include curbing the overprescribing of opioids and synthetic opioids supply, and increasing emphasis on recovery, as well as increased awareness of the epidemic as the result of a disease.

“There’s a lot of relapsing in opioid addiction as you might expect, so it’s important to have recovery support as we treat these addictions. It’s been noted that relapse rates for substance abuse disorders are similar to other diseases, like diabetes,” said Jim Douglas, former governor of Vermont, Governor’s Advisory Council of the Bipartisan Policy Center and co-chair, HIMSS State Advisory Roundtable.

As federal officials continue to offer more consistent messaging around opioid addiction as a disease requiring a public health approach based on science and evidence, stigma surrounding addiction will continue to subside. With the growing adoption of PDMPs and increased awareness, hopefully more light will be shed and progress made towards the grave impact this epidemic has inflicted across multiple generations.

Be part of what’s next for health