How My Mom’s Health Story Gave New Meaning to Interoperability

#IHeartHIT, our yearlong storytelling initiative, helps shine a light on the human side of health information and technology and the impact it can have on the health and wellness of every person, everywhere. Read one story below and consider sharing yours. 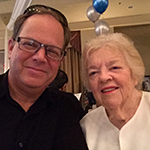 My mom is 79 years old, and lives alone in a retirement community in Southern California. During the night, she experienced tremendous pain from her hip and inner thighs, down to her feet. She was unable to stand.

A neighbor heard her cries for help and took her to the local hospital emergency room. She completed admissions paperwork, was seen by a couple of doctors and diagnosed with sciatica. They administered and prescribed pain medication, contacted her primary care physician (PCP), and she was discharged to her home. Her brother (who lives in San Diego), was able to get her there safely while I traveled from Arizona to care for her.

She spoke with her PCP the next day and was referred to a local pain doctor. Four days later, she met with the pain doctor, and his office needed her to complete the same paperwork required by the hospital despite the fact it appeared the pain doctor had some record of the hospital’s diagnosis and incident treatment.

She was in so much pain, she was borderline hysterical. As a result, the pain doctor would not examine her in her current condition. Rather, he ordered an MRI to pinpoint where the sciatica was originating –L4, L5, S1 or S2– with the intent to inject steroids to the appropriate location to alleviate the pain.

We were handed a written prescription for an MRI, and another for more drugs. We dropped off the prescription at the local pharmacy and had to wait for it to be filled.

We experienced some scheduling challenges due to availability, which meant the MRI would be performed four days later. This made a total of eight days since she left the hospital, with nothing more than prescriptions to mask the pain.

When we got there, my mom once again had to complete the same paperwork as she did at the hospital and the pain doctor. After the procedure, we were told the results would be sent directly to the pain doctor the next day.

When we arrived back home, we received a phone call from the MRI organization requesting a copy of the prescription. I asked if they could reach out to the pain doctor to obtain it. They preferred we send it to them instead.

We had no access to a paper scanner or fax machine, so I took a picture of the prescription with my phone and sent it to them via email, with the image of the prescription as an attachment. I called to confirm they had received it. I then asked if we are on track to get the report to the pain doctor tomorrow. They said it would be Monday, as this was the end of the work day/week.

RELATED: Implementing Protocols that Save Lives

I called the pain doctor’s office Monday to confirm receipt of MRI report. Yes ... it was received via fax, printed and filed into her paper-based patient chart. We then scheduled a visit for Thursday that week because that’s the only day their office administers steroid shots.

Thursday came, and for the first time since the night when she was taken to the hospital, my mom was finally in good spirits. Again, we were asked to complete the same paperwork as we did during our first visit. While we were waiting to be called, the pain doctor came out to the waiting room, put his hands out to his side with palms up, and said to the employee behind the desk, “Where’s Dolores’ fax?” My mom’s shoulders dropped and she immediately began crying.

I stayed calm and explained that I had confirmed that the report was received on Monday and that it was in her patient chart, which I knew was in the adjacent room. I even offered to retrieve it, although I knew this was against their policy.

The front desk employee said he would get it, but rather than leave his chair, he called the imaging facility to request they fax the MRI report again. Twenty minutes later the fax was received.

Another 15 minutes later, the pain doctor reappeared. He grabbed the fax report off the desk, licked his thumb, turned to page 4 of the 15 page document, read for three seconds, and said, “Let’s go Dolores.” She received her shot a few minutes later … L4. Spirits up! He then prescribed a CT scan and my mom was told to follow up with her PCP.

Experiencing the True Importance of Interoperability

The day after the steroid shot my mom felt some relief. The following day was even better. Eventually she was back to her usual self.

After scheduling and availability issues, the CT was finally performed seven days later. We were challenged yet again with scheduling a follow-up visit with her PCP. Another seven days later, we arrived at the PCP. He was unable to locate the documentation about her visits and results. It was finally resolved, and the PCP gave her the thumbs up. The repetition in paperwork, the hurry up and wait game, the lack of communication … the entire ordeal was disheartening. I think the hardest part was seeing my mom in so much pain. Even more frustrating is that I work in health IT, and I know that technology exists that can help solve these problems.

It is so hard for me to believe that we are still using paper-based fax technology to coordinate care. Don’t get me wrong; we have made definite strides in care coordination and huge efforts are underway to establish connectivity between all providers so that information can flow easily, at the point of care. When it’s finally in place, providers will be able to make more informed decisions and their patients will experience better outcomes.

My mom’s health story was an important one to me. It gave new meaning to the word “interoperability.” A word that I use almost every day at work has now become far more personal than what it meant before. It’s not just some patient, now it’s my mom.

I want to take a moment on behalf of me, my family and friends, to say thank you to all who are focused on solving these critical issues.

Be part of what’s next for health.