Background: Diabetes is a significant problem in Saudi Arabia. Providers can impact healthcare outcomes by using patient portals to communicate with patients.

Objective: The objective of this quality improvement project was to explore the impact of patient portal use on HbA1c and fasting blood sugars in individuals with diabetes in a rural primary care clinic in the Eastern Province of Saudi Arabia.

Diabetes mellitus (DM) is a critical problem in the Middle East. Estimates of the rate of individuals with DM in Saudi Arabia vary from 14.4% to 23.8% (International Diabetes Federation, 2017; World Health Organization, 2016). In a rural primary care clinic in the Eastern Province of Saudi Arabia, the number of individuals with DM is approximately 2,093, which is 9.5% of the total number of eligible medical recipients assigned to the clinic. Of those individuals, approximately 18% (376) are poorly controlled with a glycosylated hemoglobin A1c (HbA1c) > 9%. A strategic initiative and key performance indicator for the clinic is the percentage of individuals with poorly controlled DM. Efforts for chronic disease management are focused on improving outcomes for these patients.

The reduction of HbA1c in individuals with poorly controlled DM is a focus of the primary care clinic. The clinic has used methods such as care management, telephone follow up, and patient education to improve outcomes. The use of electronic health communication practices has been shown to improve glycemic control (Cotterez, Durant, Agne, & Cherrington, 2014; Price-Haywood, Luo, & Monlezun, 2108); however, most of these reports were from Western countries. More research is necessary to fully evaluate the impact of patient portal use on glycemic control in the Middle East (Fraccaro et al., 2018).

The primary care clinic is part of an organization that was the first in Saudi Arabia to install a comprehensive electronic health record (EHR) in January 2018. This EHR has an accompanying patient portal, which allows communication with large numbers of individuals simultaneously. Use of a patient portal as a means of communication for chronic disease management has been explored in different regions around the world for a variety of chronic disorders (Coughlin, Williams, & Hatzigeorgiou, 2017); however, there is limited information in the literature about patient portal use in Saudi Arabia. Weber et al. (2014) found 306 published articles related to electronic health records in the Gulf Cooperation Council (GCC) countries, of which Saudi Arabia was the largest number. Few of those articles, however, related specifically to patient portal research. Weber et al. (2014) further found that of the studies originating from Saudi Arabia, most were qualitative design and few were randomized controlled trials. Jahan, Al-Saigul, Nimir, & Mustafa (2014) reported that Saudi researchers considered DM the highest priority research in the kingdom.

For the current project, a literature search was conducted using PubMed and Scopus. The terms “patient,” “portal,” “electronic,” “mobile,” “internet,” “messages,” and “diabetes” were searched in titles and abstracts. The search was filtered for English language, full text articles that were published in the last five years. PubMed yielded 108 articles and Scopus yielded 10,186 articles. Adding the terms “Middle East” or “Saudi Arabia” yielded one article in PubMed and 13 articles in Scopus. Titles and abstracts were reviewed for relevance and no articles were found that met all criteria. Published articles on the use of a patient portal to impact patient outcomes have been conducted in areas outside the Middle East (Fraccaro et al., 2017; Fraccaro et al., 2018). A review of these articles yielded mixed results on the role of the patient portal in diabetes management. More research is needed to clarify the impact of use of the patient portal for chronic disease management (Fraccaro et al., 2018; Kruse, Bolton, & Freriks, 2017).

A quality improvement (QI) project was conducted at the primary health clinic in Saudi Arabia to explore the use of the patient portal to send biweekly messages to patients and the subsequent impact on HbA1c and FBS levels. An institutional review board (IRB) application was submitted for approval and the QI project was deemed exempt.

The intervention for this project involved sending messages to the EHR patient portal of participants with information about general diabetes, medication, healthy living, and dietary information. A project team was identified who were responsible for planning and implementation of the intervention. Team members included the program coordinator, case managers, charge nurses, staff nurses, and physicians. The team was responsible for recruitment of individuals, as well as for monitoring patients’ receipt and reading of the messages. Individuals found not to be reading their messages were contacted via telephone to ascertain if problems existed and assistance was provided if necessary. Individuals received notification of messages, which they could view in the patient portal.

Messages were developed by the project coordination team in consultation with the clinical expert and clinical mentor. Messages aimed at providing information about general diabetes and complications, medication information, healthy lifestyle tips, and recommended dietary regimens as the following examples indicate: 1) Eat only a palm sized portion of rice, 2) Remember to have your annual eye exam, 3) Remember to have your annual foot exam, and 4) Walk at least 30 minutes each day.

Inclusion criteria for this project were as follows: adult individuals with DM who were 1) able to read and understand English, 2) eligible for treatment at the clinic, 3) active patient portal status, 4) aged 18 to 75 years old, and 5) with HbA1c > 9%.

A sample of 31 eligible individuals with HbA1c > 9% were identified and provided consent to participate in the QI project. Participants agreed to receive biweekly portal messages and patient portal status was confirmed by team members. All individuals were required to have their patient portal status “active” to allow them to receive and access messages. The clinic’s EHR has a built-in patient portal that allows bi-directional communication between providers and patients (Epic, 2018). Messages were sent generally on Sundays and Thursdays but were altered as needed for holidays or non-working days. Individuals could view their messages through the patient portal or a smart phone application, and notification of message receipt could be set in the portal by participants. Participants could choose to receive message notification either by short message service (SMS) or e-mail, and were encouraged to configure their settings to receive message notification by SMS.

HbA1c and FBS levels for each participant were collected at least three months prior to the intervention. The intervention began March 11, 2018, and continued until May 31, 2018, for a total of 12 weeks. Data were collected indicating whether patients read the messages. Patients who did not read several messages were contacted by telephone by a member of the project team and encouraged to log into the portal to read the messages. Not reading the messages for several weeks after telephone contact resulted in participants being dropped from the project.

Of the 31 participants beginning the project, six were dropped due to not reading messages or system issues and four were unable to return for post-intervention levels, resulting in the exclusion of 10 participants. The majority of participants were male (81%) and native Arabic speakers (87%). Final HbA1c and FBS were collected on the remaining 21 participants. Data were added to a database maintained by the project coordinator. 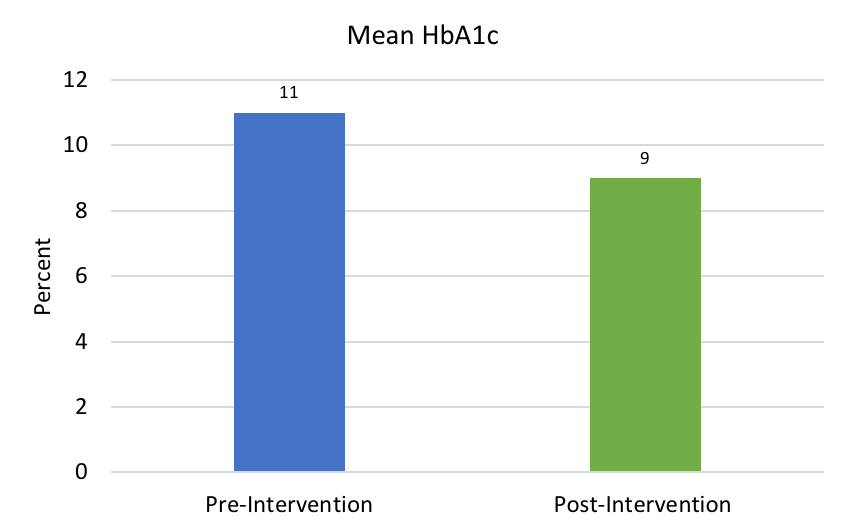 Using patient portal messages was successful in improving HbA1c in adult patients with DM. Feedback on the portal intervention was gathered for participants by telephone interview survey. Participants were asked three questions: 1) How difficult was it to access the patient portal? (1=easy, 2=neutral, 3=difficult), 2) Did they find the messages helpful? (yes/no), and 3) Did they want to continue receiving messages? (yes/no). Eighty-four percent found accessing the patient portal easy or they were neutral, 92% found the messages helpful, and 80% wished to continue receiving messages. Participants were also asked for suggestions. Responses included the following suggestions: receive messages via SMS, receive messages in Arabic, decrease to one message per week or increase to daily, include other topics and diseases other than diabetes, and send reminders for appointments and checkups.

Although the project was successful, limitations did occur, including blocked portal or internet access resulting in patients not reading messages. Language was an important limitation. The patient portal was only available in English and the native language for most of the participants was Arabic. English and Arabic are official languages of the healthcare organization. Thus, employees are more likely to speak English. However, their family members were less likely to speak English, excluding them from participation in the project because the portal was not translated into Arabic. Most participants were male employees of the healthcare organization, potentially contributing to gender bias. In addition, the project timeline fell partially during Ramadan, which is typically a time of diet noncompliance for individuals with DM in this culture, potentially impacting the results of the project. Another limitation of the project consisted of proxy access to participants’ EHRs by their sponsors. Sponsors were the primary individuals insured by the healthcare organizations that provided coverage for dependents. In two cases, a participant’s adult children had proxy access to their patient portals, preventing these individuals from receiving the intervention messages. Case managers called these patients once per week and read them the messages.

The project site’s healthcare organization was the first to implement a comprehensive EHR in Saudi Arabia; thus, availability of a patient portal was a unique occurrence. Although patient portal use to manage chronic disease is common in Western cultures, the use of portals is less understood in the Middle East. The project presented a unique opportunity to apply known techniques from other countries to a Saudi Arabian healthcare system.

The results of the project indicate that patient portal use can be an effective tool in provider-patient communication. This project illustrated barriers in the process that should be addressed before patient portal use can be used to its maximum potential. Communication with individuals with diabetes is an important means to improve glycemic control and can help improve patient outcomes, foster patient engagement, and reduce healthcare costs.

Dr. Tara Belcher is a nurse manager in outpatient services at Johns Hopkins Saudi Aramco in Ras Tanura, Saudi Arabia. She earned a bachelor of science in nursing from the College of West Virginia, as well as a bachelor of science in biology from Virginia Polytechnic Institute and State University. She received a master of public administration from Walden University and a doctor of nursing practice (DNP) degree from the Medical University of South Carolina. Dr. Belcher is board certified by the American Nurses Credentialing Center as a nurse executive-advanced.

Dr. Joy Vess is an assistant professor in the College of Nursing at the Medical University of South Carolina and teaches in the DNP program. She earned a bachelor of science (nursing) from Clemson University and a master of science in nursing and doctor of nursing practice degrees from the University of South Carolina. Dr. Vess is board certified by the American Nurses Credentialing Center as an acute care nurse practitioner for both adult and pediatric populations.

Dr. Emily Johnson is an assistant professor in the College of Nursing at the Medical University of South Carolina (MUSC). She received a bachelor of science degree from Furman University, a master in health administration degree from MUSC, and a doctoral degree in health and rehabilitation science from MUSC. She served as an administrative resident at MUSC Hospital Authority prior to starting a research analyst position at MUSC, which she held for over 11 years.

Cotterez, A., Durant, N., Agne, A., & Cherrington, A. (2014). Internet interventions to support lifestyle modification for diabetes management: A systematic review of the evidence. Journal of Diabetes Complications, 28(2), 243-251.

Kruse, C. S., Bolton, K., Freriks, G. (2017). The effect of patient portals on quality outcomes and its implications to meaningful use: A systematic review. Journal of Medical Internet Research, 17(2), 1-8.